I mentioned a while back that I’ve been learning to do a little bit of yoga, and I wanted to follow up here with a little more about that.

For those of you who don’t know me, I should start by explaining a few things. Set the scene, so to speak. First, as should be obvious from my profile picture, I am not a slim person. What is a little less obvious is the fact that I have in my fifty year-old body not one single ounce of either grace or coordination. It’s like living in a machine with mismatched parts that don’t quit fit together.

Something as simple as walking down the street can be a real challenge, what with my right foot often pausing to say to my left: “Why, hello! Fancy meeting you here. Have we met?” To which my left usually throws in a hearty, “No, we haven’t! Let’s shake on it!”

Now just to add to the general mayhem, toss in the facts that I rarely exercise voluntarily and that a big chunk of my Franken-spine is fused with metal.

All of which boils down to the realization that I am not a Yoga person. I am, in fact, the anti-Yogi.

My sister is in the process of becoming certified to teach Yoga, and she’s been willing to drive out to my middle-of-nowhere town to teach me. Since my apartment is tiny and hotter than the surface of the sun, she chose the the pretty little gazebo in the park in the center of town for our lessons. 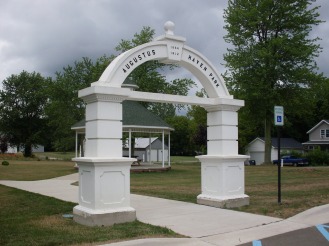 First thing I did was remove my glasses so I couldn’t see how many people could see me. Sort of like an ostrich burying its head in the sand. If I don’t see the horrified expressions on the faces of people staring at my giant butt in the air as I “Downward Dog,” then I can pretend that it never happened. Just please don’t ever mention it to me. I am sure there are support groups forming even now for all who have had the misfortune of glancing in my direction at the wrong moment.

She started by throwing out some yoga terms. Drishti. Tadasana. Mula Bandha.

“Now you’re just making stuff up,” I accused after that last one.

“I’m not!” Mula bandha, she explained, is similar to the Kegel exercises I lied about doing during all of my pregnancies. Apparently, it’s all about someday being able to sneeze without crossing my legs.

I’ll admit, I was pretty resistant to the whole Yoga thing at first. When I think of Yoga, I picture a lean young woman in a jogging bra and shorts, stretching and posing slowly on a beach in front of a peaceful sunset. I just can’t wrap my brain around a fat middle-aged woman flailing about on a colorful mat in the middle of the park.

My sister adds a wonderful touch of humor to her lessons. “I brought some bug spray,” she told me one week in her soothing Yoga-teacher voice. “It’s all natural and environmentally friendly and doesn’t work for shit, but you feel really good about yourself while the bugs eat you alive.”

She gives me homework every week between our classes. “How did it go this week?” she’ll ask me.

“I’m getting better at Mazeltov,” I’ll tell her.

In just a few short months, I’ve learned that I love Yoga. More precisely, I love the way Yoga makes me feel. My old, fat, stiff body is feeling so much . . . well, I can’t really describe it. Warmer, stronger, more open. I am standing straighter, sleeping better. Maybe even breathing better. I am, however, still struggling with the Manischewitz.

Yoga’s not about fitness. It’s completely non-competitive and it seems really odd to go to an exercise class in which I barely break a sweat. There’s no cardio, no goal-setting, no pressure. I’m probably not going to shed a single pound by doing Yoga, but I am gaining so much more.

Even if I never master the Manicotti.

So, if you’ve never tried Yoga, I highly recommend taking a class or two. Give it a shot. What have you got to lose — other than perhaps a bit of your dignity? And if you have tried it, I’d love to hear from you. Love it or hate it? And how long did it take you to master the Molybdenum?

9 thoughts on “Downward What?”