If I could have any superpower, I would want to be able to teleport. I mean, come on — have you seen what Nightcrawler of the X-Men can do? He thinks about where he wants to go and just goes there, just like that. He also gets to make a really fun bamf! sound and leave a stinky spot behind him.

Okay, it’s true. I’m a comic book nerd. Or I guess I should say I’m a reformed comic book nerd. My glory days were in the late 1980’s/early 1990’s. My friends Deb and Bruce were the ones who got me started. They hooked me up with a stack of WaRP Graphics’ Elfquest, all the way up to issue 17, and there was no turning back. Wendy Pini’s art turned out to be a gateway comic for me. 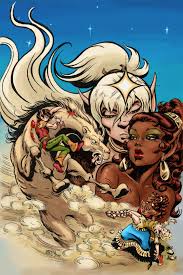 I tried to stay with the small stuff. The independents. Elementals, Concrete, Love and Rockets. I even read the old black-and-white Teenage Mutant Ninja Turtles long before they were quite so kid-appropriate. I branched out a little into the DC universe when they launched The Watchmen, but I had it under control. I could stop any time.

Then Deb and Bruce lured me into the world of superheroes with an old, battered copy of X-Men #137, and all was lost. (Those of you out there who share my addiction are either gasping or nodding sagely right now, aren’t you? You know what happened in X-Men #137.)  I had to find out what had happened in the years after that classic came out; I started haunting comic book stores in search of back issues. I subscribed to Comic Buyers’ Guide and Amazing Heroes.

It was a slippery slope from there to New Mutants and Power Pack. Then it was Peter Parker The Spectacular Spiderman, Fantastic Four, and even Power Man & Iron Fist. I counted down the days every month until I could get my hands on the newest issue of Teen Titans — no, not the silly show on Cartoon Network, but the issues with good storylines from Marv Wolfman.

Okay, so I’ve veered way off-topic here, haven’t I? Let’s just say it’s my way of establishing the fact that I know a thing or two about superpowers.

Telepathy would be awesome, wouldn’t it? Imagine being like Jean Grey or Psylocke. I could sit on my pudgy little rear end and just use my mind to do my work for me. Sip a glass of wine and watch the laundry fold itself. Time to cook supper? Not a problem. I could build a pan of lasagne without lifting anything but an eyebrow,

Unfortunately, I tend to be a bit on the lazy side as it is.  I’m the kind of person who bends over to tie my shoes and tries to figure out what else I can do while I’m down there. Hey, I don’t want to have to bend over twice unless it’s absolutely necessary. If I could move things with my mind, I would become the single most lazy person on the planet. No, telepathy would not be a good power for me.

Flying would be great. I’ve always envied birds their ability to make it look so easy. I read Jonathon Livingston Seagull for the first time when I was in third grade, and I remember wanting to fly so badly that it hurt. Even now, I love to sit outside and watch the hawks circle and soar, the embodiment of pure freedom. I imagine flying would be sort of like swimming for me; the only time I ever have any kind of grace or coordination is in water, and I think that flying would feel like coasting through the smooth waters of Lake Michigan on a summer day.

Then again, I’d have to share the sky with bugs and bats and other, meaner birds. And there are thunderstorms and ice storms and crazy Michigan weather to deal with. With my luck, I’d be that one poor schmuck of a superhero who dies from a lightning strike while soaring through the air.

Some of you who are new to my blog may not know this about me, but things have a tendency to fall out of the sky and land on me. I’m not talking about little things like bird poop, although in the spirit of full disclosure I feel that I must share the fact that I have been bombed with seagull shit at least once every summer of my life. Every. Single. Summer.

For the record, I’m not a big fan of blueberry season.

No, flying wouldn’t be the right power for me either, unless it came with the the added power of being able to dodge whatever the sky decides to throw at me on any given day.

Teleportation, though, would be the best. Yeah, that’s the one I want. I want to be able to teleport just like Kurt Wagner, aka Nightcrawler. At the end of a long, eight-hour shift at work, I wouldn’t have to warm up my car or scrape ice off the windshield. I wouldn’t have to fight the urge to nod off to sleep during the half-hour drive home,either. I could just go bamf! and be home.

Say my kid forgets his homework and I have to take it up to the school for him. Bamf! If I run out of milk for the kids’ cereal, I don’t have to drive to the gas station in my jammies at 6 a.m. Bamf! Although the jammies are still probably a bad idea. Got a carload of groceries that calls for three trips up the stairs to my apartment? Bamf! Bamf! Bamf! 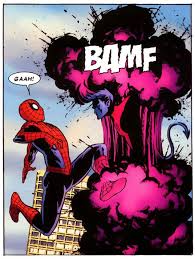 Think of the money I could save in gas!

And speaking of gas, that’s pretty much the only drawback of Nightcrawler’s power. Every time he pops in or out of a room, he leaves behind a foul, sulfuric odor.  As the mother of a teenage son, I can safely say that I have more than a passing familiarity with things that leave being foul, sulfuric odors. By this stage in my life, I have built up an immunity. The smell wouldn’t bother me at all.

And on that note, I think it’s time to wrap this up. What about you — what kind of superpower would you want to have, and why? Would you use your powers for good, or just for fun?

This post has been part of Finish the Sentence Friday, with the sentence starter “If I could have any superpower, I would want to be able to . . . ”  Since I was silly enough to suggest the sentence this week, I am also a co-host, along with Kristi at Finding Ninee and Michelle at Crumpets and Bollocks.

Link up your Finish the Sentence Friday posts below! Want to stay on top of the topics and join us? Join our Facebook group!

If you enjoyed this post and would like to check out more of my strange way of looking at things, check out my book Have a Goode One available on Amazon for only $2.99.