Daily Prompt:  Tell us about a time when everything seemed to be going wrong – and then, suddenly, you knew it would be all right.

I thought my world was ending the night of my car accident.  After a stranger hauled my kids out of the wreck, I couldn’t see or hear them anywhere.  I kept begging the EMS workers to tell me where my kids were, but all they would tell me was “they’re fine.”  But where are they? “They’re fine.”  Are you lying to me?  “They’re fine.”

The guys wouldn’t look me in the eye.  Now I understand that it was because I had no idea just how bad the situation was, and that most of them thought I wouldn’t survive the night.  But at the time, I assumed they were covering up some dire information about my babies.

The youngest was okay; he’d been home with his father at the time of the accident.  My daughter was shaken up but unharmed.  But my oldest son had some minor injuries – lots of glass in his left shin and hand, and a small gash on his right shoulder that needed a few stitches.  I never got to see him at the hospital, and I just couldn’t get rid of the nagging suspicion that they were lying to me about him.  I couldn’t convince myself that he was okay.

Then the doctor came back in with the results of my CT scan and dropped the bomb:  My neck was broken.  It was bad.  He couldn’t help me at our very small hospital.  “I have never seen an injury like this on someone who was still alive,” he told us.

They had to send me to a bigger hospital, but my son was already being treated at the local one.  They had to separate us, and there was just no way for my husband to be with both of us.

My boy was twelve years old.   He needed his father more than I needed my husband at that moment, and I had to go alone.

When they wheeled me into that tiny room at Bronson Hospital and I couldn’t see anything other than the ceiling above me, I felt like I was hanging on by my fingertips.  I wanted to be unconscious.  If I hadn’t been strapped down and restrained at every extremity, I would have leaped from that bed and run screaming through the halls.

They kept asking, “Is anyone coming to be with you?  Is there anyone I can call?”  and I would tell them no.  Husband couldn’t be there.  There was no one else.  I’d tell them it was okay, not to worry.  But it wasn’t okay.

Then I heard my sister’s voice.

Now, I have to digress here for a moment. My oldest sister is only four years older than I am, and she has set the rule that I am not to refer to her as big sister, older sister, oldest sister, or any variation of those terms.  Once I hit thirty, she made it very clear that we are all three the same age from here on out.  We are all three adults, and she will not tolerate any comments that make reference to the fact that she is older than I am.

I don’t usually think of her in terms of age.  We are equals, and she has become one of my best friends.  But when I heard her voice in the hospital room that night, she wasn’t my equal.  She was my Big Sister, and everything was going to be okay.

I could break it down and point out all the reasons why her presence made everything better.   But it came down to one important fact:  She is my Big Sister.

And I knew everything was going to be okay.

There were so many people who stepped in; I couldn’t have gotten through all of it without my Mother-in-Law, Brother-in-Law and his wife, the neighbors and friends  who brought food and helped carpool the kids around, etc.  But that one single moment that turned it all around, that let me know things were going to get better, was the moment when my big sister showed up to take care of me.

Now, if only she’ll forgive me for telling the world which one of us is older. 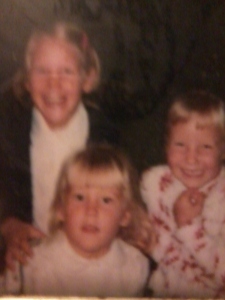 8 thoughts on “Daily Prompt: All Right”